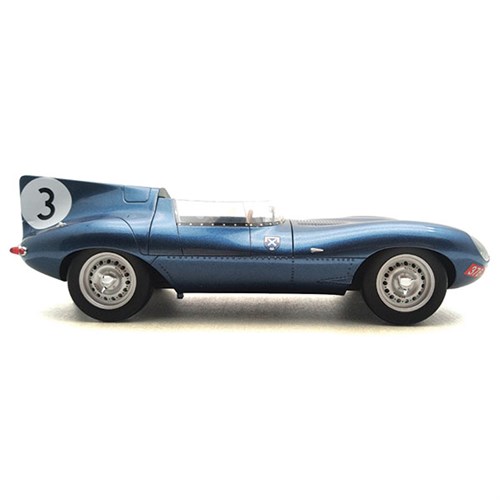 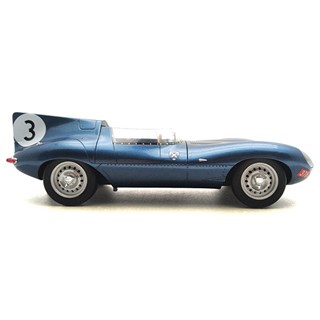 Diecast Legends Exclusive 1:18 resin model of the #3 Jaguar D-Type as driven to victory by Ron Flockhart and Ivor Bueb in the 1957 Le Mans 24 Hours.

Jaguar had won the Le Mans spectacular in 1955 and 1956, first with its works team and then with Ecurie Ecosse. At the end of ’56 the factory retired from racing, although that clearly didn’t stop them from supporting privately-entered cars. In particular, for 1957, ex-works driver Duncan Hamilton and Ecurie Ecosse both had one of the experimental, fuel-injected, 3.8 litre cars that developed nearly 300 bhp.

Even though Jaguar as a company had withdrawn from racing, they would still be up against factory teams from all the other major manufacturers. Aston Martin brought three works cars, Ferrari brought 10. The Maserati factory had five cars for the race.

In practice, it was Ferrari and Maserati who set the pace. The lead Ecurie Ecosse Jaguar developed a misfire. It was sorted that evening, and the car was taken out on the public roads at 4:00am for a shakedown, reaching a speed of almost 180 mph. Luckily, speed cameras didn’t exist in 1957!

It was a race that was to be totally dominated by Jaguar. Early on, the Italian challengers started to fall away, such that, at the start of the third hour, the Ecurie Ecosse Jaguar of Flockhart and Bueb moved into the lead. It was a lead they would not relinquish, reaching the finishing line some eight laps ahead of the next Jaguar.

That year, the D-Types finished first, second, third, fourth and sixth. Reliability was the key and, in fact, the winners had a trouble-free run, with the exception of an unscheduled pit stop to change a light bulb. Over the entire 24 hours, the Flockhart/Bueb car spent just 13 minutes and nine seconds in the pit lane! It was to be Jaguar’s finest hour.

This replica is limited to just 100 pieces worldwide, and once sold out it will never be replicated again.