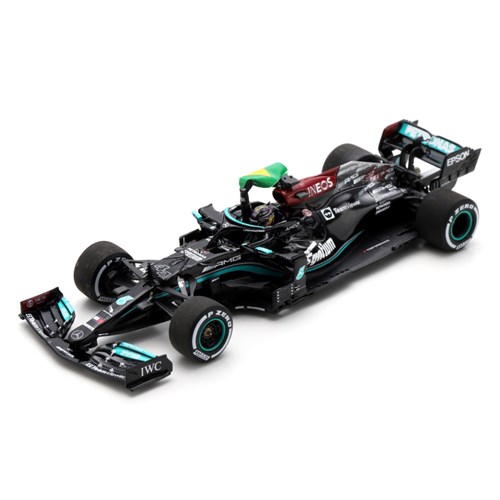 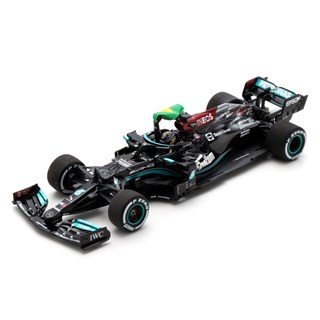 Spark 1:43 resin model of the #44 Mercedes F1 W12 as driven to victory by Lewis Hamilton in the 2021 Sao Paulo Grand Prix. Hamilton knew that he would be on the back foot coming into the 2021 Sao Paulo Grand Prix weekend, facing a five-place grid penalty for the main race on Sunday for needing to use an extra engine. What he didn’t expect was being disqualified from first place in the Friday qualifying session because of an issue with the DRS on his rear wing, leaving him at the back of the grid for the Saturday sprint race. Undeterred, he stormed through the field to cross the line fifth. With his penalty applied, that meant he would be starting the grand prix from 10th position. Unsurprisingly he took little trouble despatching those ahead of him, until he came across a certain Mr. M. Verstappen who was holding the lead. Hamilton looked like he had a move completed on the Dutchman, until the Red Bull driver threw his car back up the inside, forcing them both off the circuit. Lewis showed remarkable composure to regroup and pull off the pass at the same part of the circuit a couple of laps later. He then reeled off the remaining laps to record a stunning against-the-odds victory on a highly controversial and dramatic weekend for Formula One racing. On his victory lap Hamilton carried the Brazilian flag, which Spark has included in its 1:43 special. Another difference with the car is that it ran with Syntium logos on its sidepods during that race, as opposed to the usual Petronas ones.
Read more